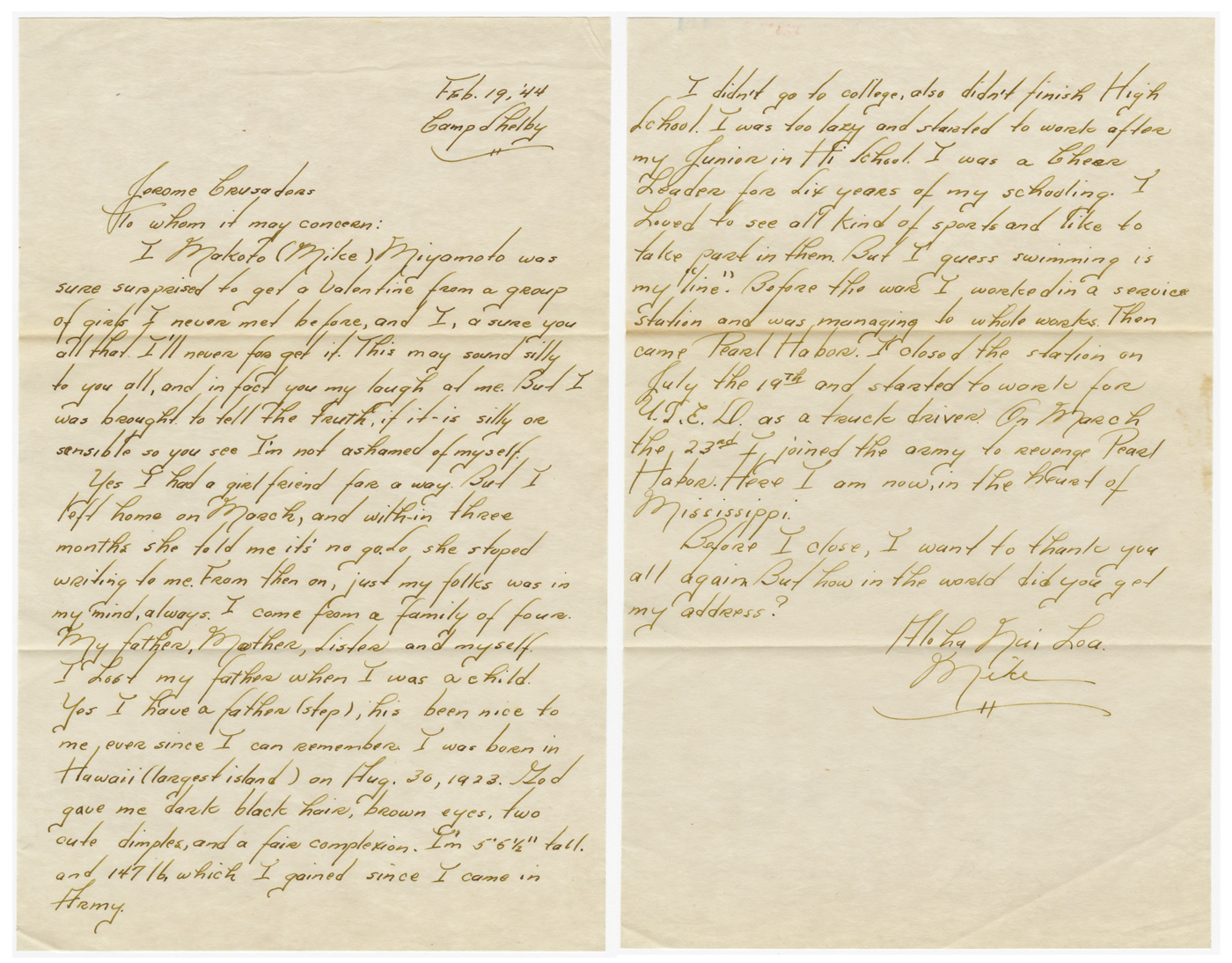 Jerome Crusaders
To whom it may concern:
I Makoto (Mike) Miyamoto was sure surprised to get a Valentine from a group of girls I never met before, and I, asure [sic] you all that I’ll never forget it. This may sound silly to you all, and in fact you may laugh at me. But I was brought to tell the truth, if it is silly or sensible so you see I’m not ashamed of myself. Yes I had a girlfriend far away. But I left home on March, and within three months she told me it’s no go so she stopped writing to me. From then on, just my folks was in my mind, always. I came from a family of four. My father, mother, sister, and myself. I lost my father when I was a child. Yes I have a father (step), he’s been nice to me ever since I can remember. I was born in Hawaii (largest island) on Aug. 30, 1933. God gave me dark black hair, brown eyes, two cute dimples, and a fair complexion. I’m 5’5 ½” tall and 147 lb, which I gained since I came in Army. I didn’t go to college, also didn’t finish High School. I was too lazy and started to work after my Junior in Hi School. I was a Cheer Leader for six years of my schooling. I loved to see all kind of sports and like to take part in them. But I guess swimming is my “line.” Before the war I worked in a service station and was managing the whole works. Then came Pearl Harbor. I closed the station on July the 19th and started to work for U.T.E.D. as a truck driver. On March the 23rd I joined the army to revenge Pearl Harbor. Here I am now, in the heart of Mississippi.
Before I close, I want to thank you all again. But, how in the world did you get my address?
Aloha Nui Loa,
Mike

This object is part of the story Carry On, Crusaders, which is about Community & Culture.

While incarcerated in Jerome, Arkansas, a small group of five Sunday school students and their teacher, Mary Nakahara (who later became notable civil-rights activist Yuri Kochiyama), decided to start writing to Japanese Americans serving in the military. This effort grew as other students and parents joined in. They wrote to soldiers whose names they gathered by asking around in their community to find those with family members serving in the military. The letter-writers called themselves the Crusaders.

This page is taken from a scrapbook of letters and cards exchanged between the soldiers and the Crusaders. It was compiled and saved by Rinko Shimasaki, one of the high school students who corresponded with the soldiers.